Field of view &#8211; object size and other considerations

The size of an object(target) on the display screen shall have a relation to the operator taskfor example identification,recognition,observation,detection or monitoring.In digital VSSs it is imortant to understand the relationship between the camera resolution and the screen display resolution.If the camera resolution is not equal to the display resolution,the displayed scene may not show the expected amount ofdetail.If the target is a person and the VSS has an installed equivalent PAL(576i) or NTSC(486i) resolution,the recommended minimum sizes of this target,as shown in Figure 1(PAL resolution only for illustration),are

to identify the target shall represent not less than 100% for PAL and 120% for NTSC resolution of screen height(or
shall represent more than 4mm per pixel);

to inspect the target shall represent not less than 400% for PAL and 450% for NTSC resolution of screen height(or
shall represent more than 1mm per pixel); 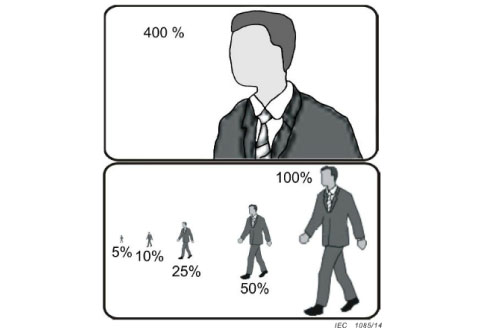 Since the influx of digital system in the VSS market there is variability in the capture,recording and display resolution.So a “recognise” requirement can no longerbe simply equated to a 50% screen height.For instance,through the use of megapixel cameras and high resolution displays it is now possible to provide the same image resolution as before using a smaller physical percentage of the screen.

Conversion tables have therefore been devised to show how the traditional percentage screen height criteria for the mentioned PAL(576i) or NTSC(486i) system will look under a range of non-PAL and non-NTSC resolutions.576i and 486i have an equivalent progressive scan vertical resolution of approximately 400 pixels and 340 pixels respectively(see Kell factor),this figure has been used in the tables below.Table 2 shows the resolutions commonly encountered and Table 3 shows the equivalent screen heights needed to maintain the required resolution.These figures should be used only as a guideline to the proportion of the screen filled by the target as otherfactors also effect the available information in the image,see in particular 13.3.

Field of view - Other considerations
Camera placement shall be based on achieving an optimum view which shall not be compromised by an easier installation procedure
When setting up a camera field of view it is important to consider other environmental or scene specific content,for example:
Foliage:there is a seasonal variation in foliage,which could block the view.Trees and plants grow over time which could also block the view;
Illumination:there might be spot lighting from external light sources and time controlled lighting which could impact the view;
Sunlight:depending on time of day and seasonal variations the position of sun could produce glare or provide poor illumination conditions;
Reflections:windows,buildings,bodies of water or any other reflective objects can result in poor or excessive illumination conditions which can compromise thedesired capturedimage;
Street furniture/signage:temporary or new permanent structures such as signs or other buildings may block the field of view;
Scene activity:if a specific task is required ensure that other scene activity does not compromise the desired image capture,for example a busy footpath in front of a doorway could occlude an identification shot.

Where person identification is the main purpose of the camera,the camera should be mounted around head height;cameras mounted significantly above head height may not be able to provide a full view of a person’s face.
via BS EN 62676-4:2015
Video surveillance systems for use in security applications
Part 4：Application guidelines(Page26-28)

Your browser is out-of-date!

Update your browser to view this website correctly. Update my browser now